The Triumvirate are the main antagonists in Contra: Shattered Soldier. They are a trio of ancient men who had governed Earth for hundreds of years, this being possible by extending their lifespans through the use of cybernetic implants. The Triumvirate represents the highest authority of the Earth Federation Government.

They are individually named: Nero, Gaius and Commodus.

In 2627 A.D. –twenty years prior to the events of Contra: Shattered Soldier– a space miner that was sent to Jupiter discovered a shrine belonging to an ancient civilization said to have ruled the galaxy many years before the birth of mankind. Men of influence wanted to monopolize on this highly advanced technology, so they sent in the army, which brought back to Earth the Moirai Relic, an object said to contain immeasurable power. However, and unknown to them, this caused Red Falcon, an alien army which was programmed to protect the relic, to attack Earth in order to retrieve it.

Some time after several unsuccessful attempts by the aliens to retrieve the relic, all thwarted by Earth's elite Contra commandos Bill Rizer and Lance Bean, the Triumvirate took the decision of framing Bill, blaming him for an accident that caused the destruction of 80% of the world's population, as well as for murdering Lance. Bill was thus apprehended and sentenced to 10,000 years in cryogenic prison. However, also by decision of the Triumvirate, he was temporarily released 5 years later in order to fight off the Blood Falcon, a new terrorist organization led by an unknown commander, who was eventually revealed to be the still living Lance.

After defeating him, and using his last breath, Lance revealed to Bill and Lucia all the truth behind the Triumvirate, as well as the reason of the previous alien invasions on Earth. After this revelation, both heroes set on their way to confront the Triumvirate. However, by the time they arrived the analysis on the relic had already been completed. Nevertheless, the power of the relic resulted to be too much for the old men to handle, so it merged with them instead, killing all three in the process. The relic then attacked Bill and Lucia, but was ultimately destroyed by them.

Their first boss form which hides in darkness.

Their second boss form which one must keep their distance.

Their third boss form which drops objects on the player.

Their fourth boss form which where the core must be attacked.

Their fifth boss form where the heart is the key.

Their last boss form which is a fusion of the previous forms.
Contra Returns 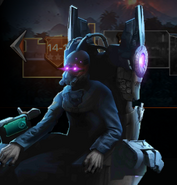 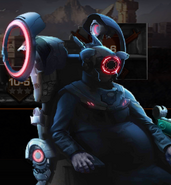 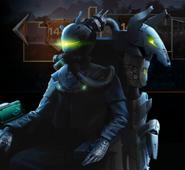