Tanks are armored vehicles which have frequently appeared in the Contra series. They generally appear as minibosses encountered midway through the level, or are actually the main bosses fought at the end.

In certain occasions, they may even be able to be ridden by the player in order to temporarily benefit of the massive firepower they provide.

With the Contra series being themed after guerrilla warfare, it's no surprise to see diverse types of tanks and other armored vehicles appearing throughout the various installments that conform the franchise.

Tanks are characterized for being large, armored vehicles equipped with heavy artillery cannons on the front and sometimes other types of armaments mounted on them, these usually being miniguns operated by soldiers either sitting in the tank's cockpit or in secondary battle stations.

Another particularity of these vehicles is that even if they advance at a slow pace, they will do so almost without stopping, in an attempt to corner and run over the player. The general tactic to avoid this consists in unleashing as much gunfire at them in the shortest time possible, taking care of not being hit by their own projectiles, of course.

Of special note is Magnus, a large heavy armored tank that has appeared as a recurrent boss in several installments of the Contra franchise. In each game, this vehicle has appeared with a completely different design, implying that the name "Magnus" is actually a brand of heavy artillery military vehicles and not just the same tank; with models sometimes specifically named after their version number (e.g.: Magnus Mk. 2, Magnus Mark V, etc.).

In the first stage of Contra III: The Alien Wars, the player can actually ride on a tank and unleash its devastating power against enemies, either by shooting its powerful cannon or by running them over. The cannon is capable of destroying Middle Fortresses in one or two shots. The experience of riding it is short lived, though, as the opposing forces will concentrate in destroying it (especially the grenadiers), or flaming gas pipes on the streets will eventually impede further progress.

In Contra Returns, there are several tanks that appear throughout the game, either as minibosses or common enemy vehicles. 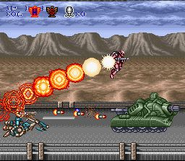 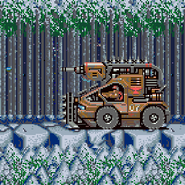 Concept artwork of a tank that was originally going to appear in Super Contra.
Русский
Community content is available under CC-BY-SA unless otherwise noted.
Advertisement