Super Contra (スーパー魂斗羅 エイリアンの逆襲, Sūpā Kontora: Eirian no Gyakushū?, lit. "Super Contra: The Alien Strikes Back") is a run and gun video game by Konami originally released as a coin-operated arcade game in 1988. It was ported to the Nintendo Entertainment System under the shortened title of Super C in North America and in Europe and Australia as Probotector II: Return of the Evil Forces. It is the sequel to the original Contra and part of the Contra series. The game stars Bill Rizer and Lance Bean, as they are sent to thwart another alien invasion. Both the arcade version and the NES version have been re-released in various other platforms since their original releases.

A year after the battle with the Red Falcon organization, Bill and Lance are sent on another mission. This time, the alien forces have taken over an allied military base somewhere in South America, possessing most of its troops. Bill and Lance must not only fight against their former comrades-in-arms, but also newly mutated forms of the same alien creatures they fought during their previous mission, as well as new alien monstrosities they may encounter along the way.

The original arcade version features less levels, and the game ends with a final fight against Emperor Demon Gava. This is changed on the NES version. The levels on this port are an abandoned city complex (with an Army Helicopter as the boss), standing before Fort Firestorm, that appears as the second level (boss - tank with three drivers. Only the top driver needs to be taken out in order to go further though). The third level is a jungle level, reminiscent of the first level of Contra, though later on it changes into an earthquake possessed area (with a wall that comes out of an earthquake as the boss). Later on, the next level is a green in color high-tech base, which you need to climb up. After defeating the boss of this area, a machine shooting multiple laser beams, you can go to the mountain area, the fifth zone. This one you have to climb up too, there are some military complexes by the end. Here, the boss battled is an alien mothership shooting skulls and small bugs at you. After, you enter an alien lair. Instead of fighting the usual soldiers, you battle spider-like aliens. This is the last time you see the default soldiers either. After passing multiple difficult corridors, you have to battle a mini-boss, and then take out Gava himself. The 7th level is a continuation to the alien base, it's made up mostly of dead alien eggs. The main enemies in this level are skeleton-like soldier aliens, possibly those are skeletons of soldiers who were killed by the Red Falcon. This level also marks the reappearance of Buggers, who appear much smaller here. By destroying a skeleton boss, similar to the third boss of Contra, you go to the final level - Red Falcon's Poison Palace. It's very similar to the final level in Contra, with many purple faces spitting bugs at you, swarms of aliens lurking at you (not Buggers, different, humanoid ones). The ceiling falls on you in one section. The final boss in this game is Kimkoh, who comes out from an earthquake at the end of the level. After his demise, Bill and Lance escape from the area in a helicopter.

The gameplay remains largely similar to Contra, the main difference being that the soldier sprites have been replaced with green (pink in levels 3 and 5) versions simply running toward the player, and red ones occasionally firing a pistol. Other differences are that gameplay appears to be slightly bigger than in Contra, Bill's pants are slightly more turquoise in color (so is Player 1's life counter) and the Flamethrower has been replaced by a different weapon, firing huge balls of fire instead of a continuous stream of small fireballs. The Spread Gun bullets appear bigger than the ones in Contra, and certain enemies also throw grenades at the player.

A unique feature in this game is a top-down view employed in the second and sixth levels, which serves as a replacement for the third-person view seen in two levels in Contra.

The soundtrack has been updated too, featuring seven unique themes for the levels (area 4 and 7 share the same one), and it resembles the actual arcade soundtrack more than Contra did. 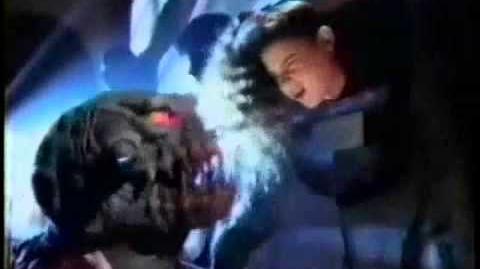