Single player
Snatcher (スナッチャー, Sunatchā?) is a cyberpunk adventure game written by Hideo Kojima and produced by Konami. It was originally released in Japan for the PC-8801 and MSX2 computer platforms in 1988. A CD-ROM based remake for the PC Engine Super CD-ROM² was released in 1992, which was subsequently localized to English for the Sega CD in 1994 in North America and Europe. The enhanced version was later ported twice more to the PlayStation and Saturn in Japan.

The setting and story of Snatcher are heavily influenced by cyberpunk and science-fiction media, taking place in a large futuristic dystopian city. The story revolves around an investigator named Gillian Seed assigned to investigate a breed of bioroids known as "snatchers", who are killing humans and taking their place in society. Gameplay takes place in a menu-based interface. The player can choose from pre-defined options such as "Look" and "Talk" to interact with the environment and its characters.

Snatcher is widely regarded as groundbreaking for the adventure genre, in that it introduced visual novel characteristics to flesh out a deep back story. Sales outside of Japan were poor due to Sega's waning support for the Sega CD, but the game has gained a cult following.

In Snatcher, Gillian Seed, the protagonist of the game, has a robot partner named "Metal Gear", which is modeled after the giant mecha usually fought in the series of the same name.

In a well-known scene, Gillian goes to a bar called "Outer Heaven" (another reference to the Metal Gear series) to interview a dancer named Isabella Velvet who works there. The establishment is having a masquerade ball that night where all of the attendants are dressed as characters from other popular Konami franchises. In the English-language Sega CD version, two characters masquerading as Bill and Lance can be seen. They were replaced by Light and Pastel from the TwinBee series in the PlayStation and Saturn versions. However, in the same 32-bit versions of the game, an ad for a Contra film is shown on a large monitor on a building in the Altamila (Alton Plaza) shopping center.

Other Konami characters include:

The scene at the "Outer Heaven" nightclub. 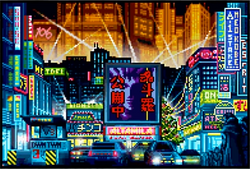