Nobuya Nakazato (中里伸也, Nakazato Shin'ya?) is a producer at Konami Computer Entertainment Tokyo, Inc. (KCET). He is mostly known for having directed and produced several games in the Contra franchise, starting with Contra III: The Alien Wars for the Super NES in 1992. His latest contribution to the series is Contra: Rogue Corps for current generation consoles.

Originally from Hachioji, Tokyo, Nobuya joined Konami in 1988 as a graphic designer. After working as a planner and director on many of Konami's games, he became General Manager in 2007, and Project Manager in 2012. He is now back in game development and recently worked as producer on Contra: Rogue Corps. Games in the Contra series that he worked on include Contra III, Contra: Hard Corps and Neo Contra.[1] 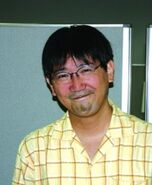 Image of the Nakazato interview unlocked in Contra 4.