Newt Plissken is a playable character in Contra ReBirth. Although initially posing as an elite member of the Contra Force, at the end of the mission he reveals himself to be none other than the leader of the Neo-Salamander Force, Chief Salamander, thus making him the real main antagonist of the game.

Newt Plissken is a reptilian-like alien who joined the Contra task force sometime around the year 4444 AD.[1] He fought alongside a (presumably) clone of the legendary Contra commando Bill Rizer and Genbei Yagyu on a mission to repel an attack from a new alien army known as Neo-Salamander, which had traveled back through time to the year of 1973 on a campaign to attack the Contra Force in a period when their weapons were still no match to theirs.

By their combined efforts, they were able to put an end to Neo-Salamander's evil plans and called the mission a success. However, after Bill was put back into cryostasis (as he initially was prior to the mission), Plissken revealed at gunpoint to the ship's navigator, BR-W9, that he actually was none other than "Chief Salamander", the leader of the Neo-Salamander Force and the mastermind behind all the hostilities, presumably having infiltrated Contra in a covert operation to fight it from the inside.

Seeing herself cornered, BR-W9 offered Plissken to work together instead; whether she was really betraying the Contra Force, or if this was a scheme quickly devised by her to buy some time, or if she was actually proposing him to change his evil ways and permanently join the force, is unknown, as this storyline was never further explored in any sequel, leaving this cliffhanger as one of the biggest plot holes in the history of the Contra series. 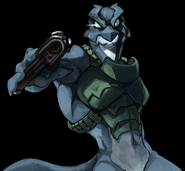 An ambiguous photo of Chief Salamander the Galactic President shows Bill during a briefing.
Add a photo to this gallery

Retrieved from "https://contra.fandom.com/wiki/Newt_Plissken?oldid=22486"
Community content is available under CC-BY-SA unless otherwise noted.