The game features a number of wrestlers based on many Konami mascot characters, including Bill Rizer and Lance Bean from the Contra series.

There is a career mode called "Max Voltage" that allows the player to relive the career of a Japanese professional wrestler, from his training days to his twilight years. In career mode, players can choose their background (ranging from wrestling to bodybuilding and even karate) in order to gain his moveset. Each player belongs to a wrestling company and they can be easily switched around in career mode. Losing a series of matches will result in game over.

Four different leagues found in this game include: Super Japan Pro Wrestling (which has stereotypical wrestlers from a circa-1996 Japanese federation), BOM (which are supposed to be the basic hardcore-style wrestlers with over-the-top character designs), WWK (which is full of self-references to other Konami games), and REAL'S (which are composed of mixed martial artists and shoot fighters).

The self-referenced Konami characters from the WWK league include: Bill and Lance from the Contra series, Richter Belmondo from Castlevania, Goemon from the Ganbare Goemon series, Getsu Fuma from Getsu Fūma Den, a Snatcher, the protagonist of Battlantis, and the protagonist of Meikyū Jiin Dababa.

Vic Viper, Lord British, Moai Head, Koitsu and Aitsu (all from Gradius, Salamander, and Parodius), and even Sparkster make cameo appearances from other Konami video games. 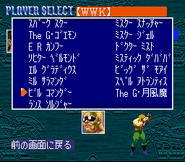 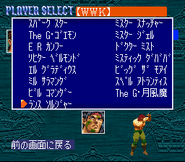 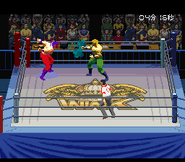 The G Goemon vs Bill Commander