Gromaides (岩獣魔神像 グロマイデス, Iwa-jū Majin-zō Guromaidesu?, lit. "Petrified Demon Statue Gromaides") is a recurrent boss in the Contra series. It is a gargantuan alien beast with large tentacle-like appendages who is usually found guarding the entrance of an enemy base.

One of the recurring bosses in the Contra series that has suffered the most drastic redesigns throughout all of its appearances. Gromaides is a giant alien monster that is generally found either emplaced around a building or sometimes even being part of the structure itself. It resembles a giant dragon-like alien beast, although bearing the characteristic elongated skull seen in many depictions of alien creatures in diverse media. One of the beast's most characteristic traits are its two semi-sentient, tentacle-like appendages, which usually move in a serpentine-like manner. These limbs have also had very different designs and usages throughout most of Gromaides's appearances.

In the original arcade version of Contra, Gromaides was just a large and immobile structure that bore alien-like imagery all over it. This creature (so to speak) only served as a structure where diverse types of turrets were mounted on, with an energy diamond-shaped core at its top which, once destroyed, signified the end of the level.

However, in the NES version of Contra, the creature was depicted in the form that would be its most recognizable design for the rest of the series. In this game, the monster resembles a giant dragon-like alien emplaced above the entrance of the second enemy base. The creature bears a ferocious expression and this was also the first time it was portrayed with its now iconic tentacle-like limbs. After twirling violently for a moment, these two extremities start targeting the player and shooting projectiles at them. In this version, the limbs end in a spiked ball shape at their tips, which of course are lethal to the touch.

In Contra: Legacy of War, the creature returned after a long hiatus, although barely recognizable from its previous incarnations and instead resembling a relatively small cave entrance with a dinosaur-like skull on top.

In Contra 4, Gromaides was seen completely detached from any structure for the first time, being much more mobile and revealing its entire body, which overall resembles a giant queen ant. Its appendages also changed, now resembling large scythe-shaped insectoid pincers (also seen in Contra Returns, where Gromaides uses its scythe-arm to impale and crush its victims with).

In Contra: Evolution (a remake of Contra), the creature suffered yet another drastic transformation, having a more biomechanical design, with its limbs also being more robotic and segmented, and less tentacled-like.

However, in Contra 3D the creature appears to have been given its definitive look, returning to the original design from the NES version, although this time the appendages are more snake-like and apparently each having a mind of its own.

In Contra Returns, Gromaides is fought several times throughout the game.

Unlike in following installments of the series, where he features a more biological body, in his original appearance in the first arcade game, Gromaides resembles more a tall artificial structure that bears the Red Falcon insignia; or, upon closer inspection, it actually appears to be some kind of Red Falcon facility from where the creature has broken out by destroying its walls. The monster bears four limbs that resemble tentacles, and is dicephalous, meaning that it has two heads, each facing opposite to the other toward each side of the screen. Whatever the case is, both Gromaides and the building are merely rendered into the background and won't display any kind of movement. Instead, its whole "body" just serves as a support from where a few turrets are affixed, having two Rotating Guns –one on each side and near the bottom of the structure– and a large five-barreled Gigazark cannon that shoots in a spreading manner. Near the top of the structure is a core which must be destroyed to defeat the boss, allowing the player access to the second base area.

Gromaides is a type of immobile emplacement located outside the second enemy base. It consists of a giant, dragon-like alien perched above the entrance which features two tentacle-like limbs with spikes at their ends, and from which it shoots rings of fire at the player. The limbs can be destroyed individually by shooting at the spikes in order to alleviate the whole ordeal. Because the player can die by bumping onto the tentacles, jumping maneuvers should only be used sparingly and only when necessary.

The creature will also keep on spewing three rings of fire throughout the fight, although these have a determined trajectory and are not aimed directly at the player.

The mouth is its weak spot and becomes vulnerable every time it opens it to shoot. Once it has sustained enough damage, both its head and the door will explode, enabling the player to infiltrate the base.

In the MSX2 version of Contra, Gromaides physically resembles more his arcade counterpart (sans the two Rotating Guns and with an overall more square-shaped body), appearing as a tall building with some conduits on the sides and featuring two alien heads on its top, each facing outward to each side. Gromaides' main mean of attack is a Gigazark, a five-barreled cannon arranged in a horizontal line located near its upper section that shoots in a spreading manner. The boss also has a core near its bottom center which must be destroyed to defeat him. Care must be taken if the player is targeting the Gigazark cannon, as the core may get in the way and block their shots. Beside these, troops of Greeders will be constantly entering the screen in pairs, one from each side, so using the Rear Gun will really help against these support units during the fight.

This enemy appears as the boss of the River of Destruction. Both of its arms have individual attacks this time around; the left arm periodically shoots fireballs at the player, while the right arm unleashes a short, homing flame burst.

Once both arms are destroyed, the alien's head will begin to attack. It will keep on spewing large rings of projectiles which then break into two smaller rings and home toward the player.

Its pulsating core is its weak spot, which becomes vulnerable once both arms are destroyed.

In Contra 4, Gromaides is much more powerful and mobile than in previous incarnations. Instead of tentacle-like limbs, its arms now resemble giant scythes with sharp pincers at their tips. The monster is introduced after the player kills three black Dirk McShooters at the top of the waterfall; it impales the remaining fourth one out of nowhere and splits him in half, spewing green blood. The creature then emerges roaring from the background and proceeds to attack the player.

Once the head has sustained enough damage, it slams the platform downward, commencing the second phase of the fight.

The platform crumbles and Gromaides starts chasing the player down during their fall while shooting energy projectiles in a sweeping motion. When it has sustained enough damage, it spazzes out until it goes out of frame, presumably explodes, and the stage ends with its damaged head crashing down onto the ground.

In Contra Return, Gromaides fights similarly to its NES counterpart by flailing its limbs and firing blasts. After taking enough damage, its metal sphere limbs burst off and it grows two claw arms (similar to those seen in Contra 4). Using these limbs, it jams them into the ground and drags them side to side to try to take out the player. It also fires blasts out of its mouth, similar to its debut fight on the NES. After taking enough hits, its head blows off and the player can continue to the next area. 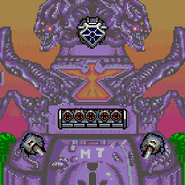 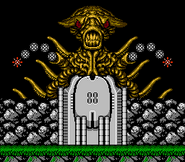 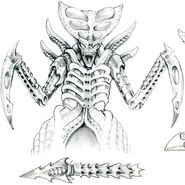 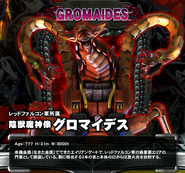 Gromaides as it appears in the Rogue Corps motion comic.

The door to Red Falcon's second base after Gromaides' death in the Rogue Corps motion comic.