Leader of the Phoenix Army

General Phoenix was a high rank member of the military and likely the general in charge of the Phoenix Army. He was the one who fired the Vortex Cannon, against the advice of scientists and without consent of the President.

He was present at a speech given by the President some time after the Alien Wars, but when the Damned City arose, he assassinated him with Ms. Harakiri's katana. He blamed Kaiser for the murder and used Harakiri's alien episode as a way to get him off his back. He also had Doctors Claude Banks and Kurt Steiner liquidated for being witnesses.

It seems likely that he was inadvertently responsible for bringing not only the Damned City, but also the Fiends into existence. Some time later, he finally arrived at the Damned City while coming across the Rogue Corps squadron. 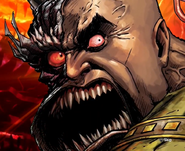 Phoenix fused with the Mega-Fiend.
Русский
Community content is available under CC-BY-SA unless otherwise noted.
Advertisement