Doctor Geo Mandrake (ドクタージオ•マンドレイク, Dokutājio Mandoreiku?) is a character in the Contra series. He was a scientist who allied with Colonel Bahamut in order to research an alien cell containing Mother Alien's DNA. He was also responsible for designing the plans for the construction of the cybernetic super soldier Lucia, although he was unable to finish the project as he died shortly after.

According to the Contra: Hard Corps instruction booklet, he was also involved in making biological weapons during the Alien Wars.

Doctor Geo Mandrake was a scientist working in a research center during the events of Contra: Hard Corps. At the end of the first stage, he informs the Hard Corps task force that the research center was being under attack and asks them for help. If the player decides to go rescue the center, he gives them information about the Alien Cell.

At the end of Stage 4, the Hard Corps get ambushed by a squad of soldiers commanded by Bahamut and the doctor. He finally drops the facade and reveals that he was allied with Bahamut from the beginning:

In Probotector on the Sega Mega Drive, his betrayal was edited out and he was removed from all scenes taking place after the research center.

With the exception of his mutated form, Dr. Geo Mandrake's boss theme is Format X.

Even though Geo Mandrake had been dead for several years prior to the events of Shattered Soldier, it was revealed that he was working on a project to create the ultimate super soldier by using alien DNA. However, he was never able to complete this project, as he died shortly after.

The plans were retrieved by the military, who were eventually able to bring them to completion, leading to the creation of the cybernetically enhanced super soldier Lucia. However, there were some parts of the research that could not be duplicated and thus didn't allow for mass production, leaving Lucia as the only prototype. She was later assigned to be Bill's partner (and watchdog) while he was temporarily put out of prison and both were sent forth on a mission to defeat the Blood Falcon terrorist organization.

Doctor Geo is a young scientist who is forced to work for the Commonwealth. He is a non-playable character who allies with Bahamut and who has to be escorted to safety during a mission.

However, since the producers of Hard Corps: Uprising have stated that the events in the game may or may not take place in the main timeline, it is currently unconfirmed if these two characters are in fact the same ones who appeared in Contra: Hard Corps. 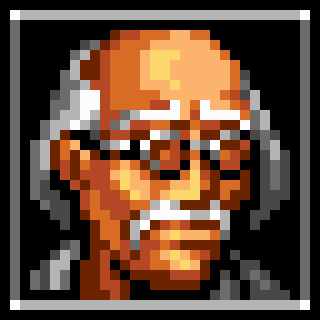 The doctor informs the player about the Alien Cell.

The doctor reveals his betrayal.

The doctor about to get eaten by one of his own creations. 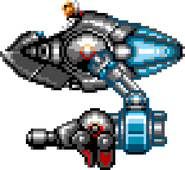 The doctor inside the Mach 777.

Bahamut uses the doctor's own technology to mutate him into a disgusting spider-like creature.
Add a photo to this gallery

Retrieved from "https://contra.fandom.com/wiki/Doctor_Geo_Mandrake?oldid=27578"
Community content is available under CC-BY-SA unless otherwise noted.