Contra: Rogue Corps
The Damned City is the main setting of Contra: Rogue Corps. It is a mysterious area which arose two years after the end of the Alien Wars, from the grounds where one of the remaining alien strongholds once stood. This desolated urban landscape is now overrun by a new race of extremely hostile and ruthless creatures known as Fiends, but it's also rumored to hold many treasures for travelers to loot.

In the opening intro of Contra: Rogue Corps, the Damned City can be seen rising from the ground after the Government sent in their latest technological weapon, the Vortex Cannon, to wipe out one of the remaining alien strongholds on Earth. They then sent out a special survey team into the city which discovered all sorts of strange artifacts and possibly remnants of highly sophisticated technology, all of which originated from a strange dimensional portal at the center of the city. Not only was this the source of all those strange technological artifacts, but apparently it was also the source of all the Fiends that now roam the area, hostile and hideously deformed creatures, most of which are fused with cybernetics and other diverse machinery. They attacked and killed all humans that dared to enter the city after their appearance, or simply those that crossed their way.

Not enough with this, if any normal human were to stay inside the city for too long, then they would end up suffering from incurable and near-fatal psychic damage, which in most cases would heavily damage their brains. A few exceptions include the Jaegers (a group of mercenaries, scrappers and bounty hunters that are somewhat naturally immune to the city's negative effects) and the Rogue Corps squadron. They were sent in to not only deal with the overrunning Fiends, but also to search for treasures.

As told by Dr. Claude Banks, the Damned City is actually a sentient, living organism in and of itself, much like the aliens' hives of the past. It is connected by an system of bio-organic chambers, powering the city with energy coming out of the portal. The Damnation Pillars/Damnation Engines continuously produce energy to keep the unstable city in control. If they were to be destroyed or removed, then the entire system of bio-organic chambers would eventually freeze and shut down. 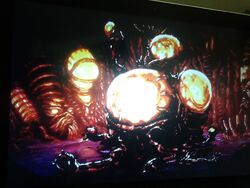 Subterranean center of the Damned City. 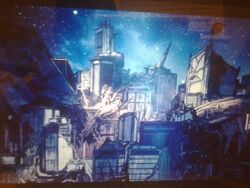 A remaining alien stronghold long before presumably become known as the Damned City.