Alien's Lair (工イリアン地帯, Eirian Chitai?) is the eighth and final stage in Contra.

This is it, the final stage. From here on the mood of the game suddenly shifts from military science fiction-action to creature horror.

Once the player gets past the Hanger, the final stage begins. The player must be careful because in this stage there will be no power-ups present; if they die and lose their power-up weapons, the remainder battle will be that much tougher. Unlike the NES version, there is no gate between the Hangar and the Alien's Lair; after getting briefly dark, an organic background will appear and the player will now be traversing the lair, which houses a gargantuan alien monster that leads the entire Red Falcon invasion force.

As the player approaches, Bundles will begin to attack from every direction. This fight will be very difficult without a weapon capable of covering a wide range. The generator of Bundles is a giant alien head called Emperor Demon Dragon God Java that extends down from the ceiling. Just before Java, stands a pile of rubble which serves as an obstacle. Java will continuously produce Bundles and the player will not be able to advance until it is destroyed. Any remaining Bundles along with the rubble pile will be eliminated when Java is defeated.

After destroying Java, the player will be running through a single linear corridor. On its floors and ceilings will be stationary alien beasts named Wadders which constantly spew out Gels. These living projectiles start out slow but soon build up murderous speed. They home toward the player, although they are not capable of turning rapidly in midair, so it is possible to outrun them. There will not be ground enemies to attack the player, so they only have to worry about Wadders and Gels coming from up and bottom. Should the player possesses a good weapon, they should continue to shoot their gun around them in an effort to reduce Gels' numbers as much as possible.

Eventually, Buggers will start appearing along the floor and ceiling, indicating that the player must be very close to the final boss.

At the end of the stage, the player will encounter a large beating heart called Gomeramos King. Gomeramos King is heavily protected by Eggrons (three on the floor and three on the ceiling) as well as a few Wadders that spew spores. In order to complete the game, they must shoot and destroy the heart. While the heart does not have any form of attack of its own, Eggrons and Wadders around it will produce a limitless stream of Buggers and Gels in an attempt to kill the player. Both the cocoons and faces can be shot and destroyed, although it will take a lot of firepower to remove them all. In the time it takes the player to clear them all away, they could potentially destroy the heart instead, so they must make their battle choice carefully. Gomeramos King's heartbeat will increase as it takes damage. If the player succeeds in destroying him, they will earn one million bonus points and be treated to watch the ending with staff rolls.

Unlike the arcade version, the Hangar and the Alien's Lair are two separate stages. There is a large gate between both stages that define them separate. Once the player gets past the Hangar zone and defeat its defense line, they will enter the Alien's Lair, beginning the eighth and final stage.

This version of the stage has bottomless pits; falling into one means instant death. In addition, there are multiple platforms which the player can take to their preference for the sake of easier progression, instead of a single linear corridor like in the arcade version. Flying Capsules appear from time to time, which could be godsend to the player, as opposed to arcade version where there are no power-ups present in the last stage at all. Other than these changes, enemies from the arcade version also appear in this version and they behave the same way.

In the Famicom version, the entire background moves and writhes, indicating that the whole lair might be organic and alive. 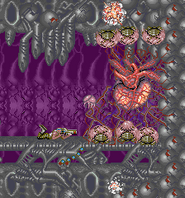 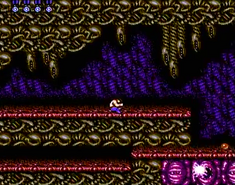 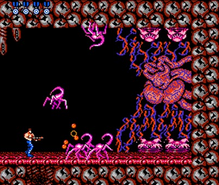 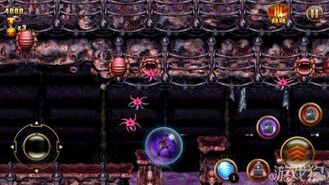