Onscreen controls
Contra Returns (Mandarin: 魂斗罗：归来 Húndǒulúo: Gūilái in China; Garena 魂斗羅：歸來 Hun2-Tou3-Lo2: Kui1-Lai2 in Taiwan) is a free-to-play mobile game developed by Tencent and Konami. It was originally released on June 6, 2017 in China and later in Taiwan in 2018. An English version was released on September 20, 2018 in Southeast Asian countries. A worldwide (North America, Latin America and Europe) Beta version is planned to be released on July 27, 2021.

Remember the secret code: Up, Up, Down, Down, Left, Right, Left, Right, B, A to get extra lives? After a 30-year hiatus, the Contra you know and love is back! Developed by famous Japanese game company Konami and world-leading game developer TiMi, Contra Returns aims to bring the classic Contra experience to mobile platforms.

In Contra Returns, players can enjoy the classic side-scrolling gameplay, two-person teams, alien bosses, and signature settings and soundtrack from the original series! All with updated HD resolution, 3D character models, and vivid acoustic and visual effects to deliver a sensory experience like no other! Get your fighting spirit all fired up with innovative content: real-time PvP battles, unique heroes, companions, and team mode! Legendary heroes Bill and Lance are making a comeback, so let's kick some alien butt and save the world!

After the fall of the Commonwealth (2625-2626), Claudius, a former senator who was involved in criminal activities, confronted the government of the Federation and decided to revive the Empire. In order to do so, he created a private military company which later became to be known as the Red Falcon Army.

In 2638, an unidentified cosmic object approached the Earth and caused the appearance of several "dark areas" (copies of real places). Meanwhile, Bill Rizer and Han Feng discovered the revived Red Falcon on the Galuga Archipelago. They also came across a laboratory that had been overrun by zombies. These beings were actually revealed to be the remnants of failed experiments performed by the head scientist, Doctor Geo Mandrake, in his many attempts to "revive" (clone) his dead daughter, Lucia.

A long war soon took place, marked by the beginning of the coup d'état of 2639. It was during this time that the Triumvirate entered the stage. The zombies successfully settled the "dark areas" and declared war on humanity, with the heroes having to fight against the Red Falcon, aliens, zombies and the former commander at the same time.

Contra Returns is different from previous Contra installments in many aspects. There are role-playing elements, new levels, heroes, weapon sets, vehicles, and even new gameplay mechanics. The game is constantly updated and new features are added frequently. Characters are highly customizable, both aesthetically and gameplay-wise, by making use of a variety of gear and upgrades which can be acquired as the player progresses through the game. The gear itself can be upgraded as well in this same manner.

The game brings together characters, concepts and events from the entire Contra franchise –including those from different time periods, as well as alternate universes– and also introduces new characters and concepts (including a few guest characters from different franchises, such as action films and comics), blending them all together in a unique storyline. Certain characters which only played a supporting role in the original timeline, now have been given a more prominent role and some can be playable as well. All characters have been given an aesthetic overhaul, with most having different and more powerful variants of themselves.

Besides the classic side-scrolling, platform action of the classic games, Contra Returns adds many new game modes to make use of the system's online capabilities, such as multiple PvP modes (like real-time ranked 3v3) where players can compete for loot to improve weapons and armor.

Bill Rizer is the only available character at the beginning of the game, but many more are unlocked as the game progresses. Playable characters are categorized into three classes based on their abilities: Class B, Class A, and Class S.

New playable characters were also added to the roster in the following months of the game's release, up to a total of 45, each with their own unique abilities along with several outfits for change. These include:

Contra: Return was developed by Tencent and Konami, and originally released as a free-to-play game for smartphones on June 6, 2017 exclusively in China. At the time of the Chinese release, it was nominated for "Best Sound Design in a Casual/Social Game" and "Best Music in a Casual/Social Game" at the 16th Annual Game Audio Network Guild Awards. Following its success, versions were released in Taiwan and Southeast Asia in 2018.

A worldwide version (North America, Latin America and Europe) retitled Contra Returns, developed by Konami in collaboration with TiMi Studios (a subsidiary of Tencent) was announced for pre-registration on July 2021, with a public Beta version to be released on July 27, 2021 for iOS and Android devices.

The score that conforms the soundtrack of Contra Returns is almost entirely conformed of rearranged tracks from previous Contra titles, such as:

In addition, completely new melodies are used in the main menu of the game and special modes, such as underwater levels, PvP battles and various events. Remixes of tracks from other Konami games –Jackal, Salamander, Rush'n Attack and Yie Ar Kung-Fu– were added in the second anniversary update of the game and later updates. 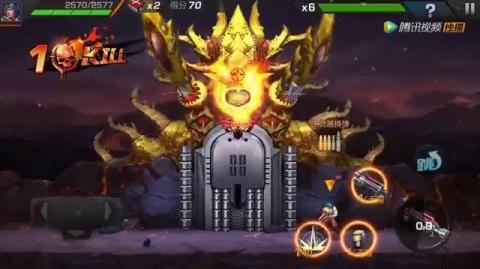 Tencent UP 2016 - New Contra Trailer
Official trailer from Tencent Up 2016.

Contra Returns Heroes Assemble! It All Builds Up to This Ultimate Battle
2021 worldwide teaser.