8-way directional pad + 4 buttons
Contra 4 (魂斗羅 デュアルスピリッツ, Kontora De~yuaru Supirittsu?, Contra: Dual Spirits) is a 2D action game for the Nintendo DS and the eleventh original installment in the Contra series. The game was released in North America on November 13, 2007. Contra 4 was produced by Konami Digital Entertainment in America and developed by WayForward Technologies, making it the first Contra game developed from an American company, as well as the first original Contra game for a portable platform since the 1991 Game Boy game Operation C.

As the game's title indicates, Contra 4 was designed to be a direct sequel to the Contra games for the Nintendo Entertainment System and Super NES (Contra, Super C, and Contra III: The Alien Wars), with a gameplay model similar to those games, and was also in celebration of the 20th anniversary of the original Contra.

A mobile phone port was released on November 19, 2007. No European or Australian version of the game has ever been released.

The game was followed by Rouge Corps.

The plot is set in 2636 A.D., six months after the events of Contra III: The Alien Wars.[1] With the Red Falcon alien threat defeated and the Alien Wars finished, the Earth is peaceful once again. However, a similar alien entity calling itself Black Viper begins launching attacks against the human race, causing mass destruction over the planet. After strange readings are detected at the Galuga archipelago (the setting of the original Contra), the Earth Federation sends their four strongest Contra Force commandos on a final strike mission to destroy Black Viper and its army of aliens, robots and mutants.

The continuity of Contra 4 is based on the Japanese canon that was adapted into the English localization of series with the release of Contra: Shattered Soldier. However, the game's producers took a number of liberties with the established canon by integrating elements of the American localizations of the older games, thus fusing the two versions together. The alien Black Viper was originally mentioned only in the North American instruction booklet of Operation C, whereas the original plot of that game (released as simply "Contra" in Japan) was about an unnamed superpower creating new weapons using an alien cell. In the timeline presented in the instruction booklet and official website, the events of Operation C are interpreted as a previous mission of Mad Dog and Scorpion –two new characters created specifically for Contra 4– against Black Viper. In actuality, "Mad Dog" and "Scorpion" were the names used for Bill and Lance for the North American NES games. In addition, Operation C was originally a solo mission of Bill in Japan and Lance in North America, as the game was one-player only.

Contra 4 is based on the same 2D gameplay system featured in the series through Contra III: The Alien Wars, ignoring many of the game mechanics introduced in later games such as the fixed weapon configurations in Contra: Shattered Soldier and Neo Contra, returning to the old method of picking up power-up icons to obtain new weapons. The play controls are similar to Contra III, including the ability to hold two weapons in inventory. The action spans both screens of the Nintendo DS system and a grappling hook can be used by the player's character to latch onto railings, allowing the player's character to move from one screen to the other. Similarly to the arcade version of Super Contra, the player can pick up the same power-up twice, giving them an improved version of the same weapon. The player can also discard a power-up, allowing them to try out a new weapon without losing a previous one.

In addition to the standard side-view stages, there are also tunnel stages similar to the two "3D view" stages from the original Contra, in which the perspective shifts behind the character's back. The action in these stages is displayed solely on the upper screen, while the bottom screen is used to display the stage's map and the locations of power-ups. Other than using both screens, Contra 4 makes no usage of the DS' special features such as touch screen (besides navigating the main menu), microphone, or multiplayer modes.

Arcade Mode is the main portion of the game, which is composed of six standard stages and three tunnel stages, for a total of nine stages. The stages pay frequent homage to Contra, Super C, Operation C and Contra III: The Alien Wars. Three difficulty settings are available: Easy, Normal and Hard. Easy is intended to be accessible to novices by providing the player with plenty of lives and credits, as well as making all power-ups upgraded by default, but does not give the player access to the final two stages nor the ending. Normal is a moderate setting described to be "as difficult as the original Contra", whereas Hard features faster moving enemies and enemy fire, with fewer lives. Hard mode also features a different ending from Normal.

After completing the main game (Arcade Mode) once on any difficulty setting, a Challenge Mode will be made available in the main menu. This game mode is composed of forty different challenges in which the player must complete various tasks within the side-scrolling stages of Arcade Mode.

The music and sound effects were handled by famed video game music remixer Jake Kaufman, who also composed for Shantae and founded the game music remix site VGMix. The soundtrack consists of a few arrangements of music from previous Contra games, as well as a lot of new material. When Arcade Mode is played on the Hard setting, an arranged version of "Dense Forest Battle" theme from the original Contra is played instead of the standard stage music. The standard Jungle theme is actually an enhanced version of a "Contra style" chiptune song previously posted on Kaufman's website, called "Vile Red Falcon".

A soundtrack CD was announced by Konami to be bundled in the first print of the Japanese release of Contra: Dual Spirits as a gift for preorders through the Konami Style webshop. This deal was only available for Japanese residents. In addition to the music found in the game, a four-minute live performance of the "Harbor" song is included as a bonus track. The song is performed by The Smash Bros, Jake Kaufman's video game tribute band.

Contra 4 received positive reviews from critics, scoring an 83 out of 100 on Metacritic. Contra 4 has been hailed as a rebirth of the Contra franchise, returning the gameplay to the classic roots of the series. It has garnered multiple awards, including IGN's "Best Action Game" and "Best Revival" of 2007,[1][2] GameSpy's 7th best game of 2007[3] and one of Gaming Target's "52 Games We'll Still Be Playing From 2007".[4] GamesRadar named Contra 4 the 22nd best DS game of all time out of a list of 25. Metacritic gave this game a score of 83/100. Praising it as a return to the classic 2D nostalgia feel.[5] Game Rankings rated this an 84.10%, as again being a favorable review marking the 20th anniversary of returning to 2D classic.[6] 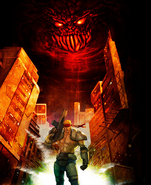