This page is a candidate for deletion.

If you disagree with its deletion, please explain why at Category talk:Candidates for deletion or improve the page and remove the {{delete}} tag.

Remember to check what links here and the the page history before deleting.

The main character is equipped with the classic rifle with an unlimited amount of ammunition. The player can also jump, move and fire in eight directions, as well as move or jump simultaneously while firing. A single hit from any enemy, bullet, or other hazard will instantly kill the player character and discard the current weapon. There are a total of four weapons the player can retrieve from flying weapon capsules or pill-box sensors:

There are also two additional supplemental power-ups: the Rapid Fire power-up which increases the player's firing speed, as well as the old Barrier that will grant the player temporary invincibility for many seconds. The power-ups in the arcade version are represented by Eagle-shaped letter icons with the exception of the Machine Gun and Laser.

There are a total of over 10 areas unlike 8 in the previous installment. There are two types of stages in Contra. In addition to the standard side view stages, Contra also features stages in which the player character is seen from behind and must move towards the background in order to proceed. Each of these "3D maze" stages are set inside the corridor of an enemy base in which the player must fight through the base's defenses in order to reach the core of the base. During the 3D maze stages, the upper screen will display a map of the base but unlike the previous ones there will be a time limit. Each maze stage is followed by a "3D fixed" stage set at the core of the base, in which the player must destroy a series of flashing sensors to expose an even larger sensor and destroy it.

Contra also features a two-player cooperative mode. Both players occupy the same screen and must coordinate their actions.One player lagging behind can cause problems for his partner, as the screen will not scroll onward, and a slow player can be fatal to his partner like said game. The European release, Gryzor, does not feature a simultaneous 2-Player mode. Instead, the 2-players take turns: whenever one player dies, the other will get their turn. 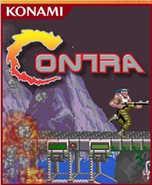 Add a photo to this gallery
Retrieved from "https://contra.fandom.com/wiki/Contra_(arcade)?oldid=24529"
Community content is available under CC-BY-SA unless otherwise noted.