Contra: Shattered Soldier, published in Japan as Shin Contra (真魂斗羅, Shin Contra? lit. "True Contra") is a run-and-gun video game part of the Contra series by Konami. It was released for the PlayStation 2 in 2002. The game marks a return to the two-dimensional gameplay style of Contra III: The Alien Wars and Contra: Hard Corps. The game was followed by Neo Contra.

In 2642 A.D., Earth remains scarred from previous alien conflicts as environmental problems grow beyond humanity's control. 80% of the planet's population was completely devastated by a malfunctioning hyper-magnetic weapons grid during development. Bill Rizer, the hero of the Alien Wars, was held responsible for the incident, as well as for supposedly murdering his partner Lance Bean who reportedly tried to stop him. He was given a sentence of 10,000 years in cryogenic prison. However, five years later (in the year 2647), Earth faces another threat as the terrorist organization "Blood Falcon", led by a mysterious superhuman commander, spreads panic over the world. The ruling government, referred to as the "Triumvirate", decides to release Rizer prior to completing his sentence, in view of his previous successes in defending Earth, in hope of neutralizing Blood Falcon. Lucia, an advanced cyborg super soldier built by the government from Dr. Geo Mandrake's research, is sent to accompany and assist Bill's endeavors.

Bill eventually finds out that Lance is still alive and is in fact the commander of Blood Falcon himself. After defeating Lance, it is revealed that the aliens from the past games attacked because the Triumvirate secretly stole a mysterious, powerful "relic" from them. With this information, Bill and Lucia have to confront the Triumvirate and uncover the secrets of the alien relic.

The game achieves its goal in mimicking the gameplay that made the previous 8-bit and 16-bit titles so popular by essentially duplicating the same style boss fights and stages. The game is known for being very difficult, arguably more than Contra: Hard Corps. Like the Sega Genesis game, Shattered Soldier has multiple endings. However, the ending received now depends on the player's performance rather than the path taken. The game also introduces the concept of a "hit rate", which gauges the amount of enemies hit as a form of performance metric. Every unique target (non-respawnable) –whether it is an actual enemy or an object in the environment– that is destroyed increases this ratio. A high hit-ratio, along with the minimization of lives lost and continues used, is essential to receive the better endings, and consequently unlock the hidden extra features. The player can replay previously cleared stages to achieve better grades.

The major departure in Shattered Soldier is the new weapon system, which consists of three weapons and three special shots. The power-up capsules and pill-box sensors from previous games are gone. The primary weapons are: a rapid fire automatic machine gun (Heavy Machine Gun), a flame thrower (Flame Whip) and a grenade launcher (Diver Mines). These primary weapons may be charged for a more powerful attack: the Round Sweeper, which launches out a "gun pod" that sprays bullets in multiple directions; the Energy Shot, a large gunshot which delivers great damage; and a barrage of Homing Missiles that traces the nearest target.

After commissioning Appaloosa Interactive for the development of Contra: Legacy of War and C: The Contra Adventure, Konami assigned their internal KCE Tokyo team to work on the next installment in the franchise. Nobuya Nakazato (the director of Contra III and Hard Corps) was put in charge of the game's direction, design and scenario. A few years prior to the announcement of Shattered Soldier, Konami had plans for a Nintendo 64 installment in the series, tentatively titled Contra Spirits 64, that would have been handled by KCE Osaka, but those plans were canceled. 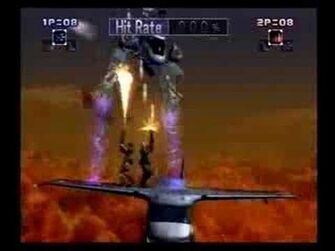