For other uses, see Hard Corps (disambiguation).
Not to be confused with Hard Corps: Uprising or Hard Corps (organization).

3 or 6 button controller
Contra: Hard Corps is a side-scrolling run-and-gun style video game released by Konami for the Sega Genesis in North America and South Korea in 1994. It was also released for the Mega Drive as Contra: The Hard Corps (魂斗羅 ザ・ハードコア, Kontora Za Hādo Koa?) in Japan, and as Probotector in Europe and Australia.

It was the first and only game in the Contra series released for a Sega platform, and serves as the first entry of the "Hard Corps" series, a subseries in and of itself within the Contra franchise.

Set in 2641 A.D., five years after the "Alien Wars". Alien cells kept at a military research facility are stolen in a terrorist attack. The Contra Hard Corps, comprised of Ray Poward, Sheena Etranzi, Brad Fang and Browny, are assigned to the investigation. They discover that retired Colonel Bahamut is implicated and that he has conspired with Dr. Geo Mandrake to create a biological weapon using the stolen alien cells as a form of leverage to overthrow the present government. Through their efforts, the Hard Corps manage to thwart Bahamut's plans and restore peace once a more.

The game follows its predecessor, Contra III: The Alien Wars, in many aspects, but also introduces several new gameplay mechanics, including:

Fight to the end

Fight to the End 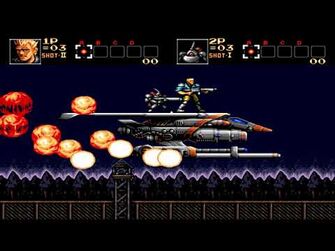