Colonel Bahamut (バハムート大佐, Bahamūto Taisa?) was an infamous veteran war hero known to have staged a failed coup d'état against the world government in 2639. He would later attempt to make use of the alien cell's DNA in order to start a new uprising.

Colonel Bahamut was among those who fought against Red Falcon's (and presumably Black Viper's) forces during the Alien Wars, where he was recognized as a war hero. Following the end of the conflict, however, he attempted to overthrow the government, although he was stopped. Two years later, he sent the expert hacker Noiman Cascade to mastermind a robot outbreak. Shortly afterward, the Hard Corps were sent out to stop the outbreak. Bahamut allied with Dr. Geo Mandrake so that the former could steal a cell containing the Mother Alien's DNA from a government research facility and examine it. To distract the Hard Corps, Bahamut hired the mercenary Deadeye Joe to do the job. Ultimately, Bahamut's nefarious plan was stopped.

Hard Corps: Uprising features a young soldier as the main character who shares the same name as the villainous colonel. Due to the game's events taking place in the year 2613 (twenty-eight years prior to the events of Contra: Hard Corps), it is still uncertain if these two individuals are the same, with the former representing the colonel in his youth. If this is the case, Bahamut's background is vastly expanded:

In the year 2613, long before humanity even became aware of the existence of aliens, most of the world was in a conflict started by the Commonwealth Empire. Under the leadership of the tyrannical emperor Tiberius, the Commonwealth was successfully expanding its territory by conquering neighboring countries. Bahamut, a citizen of the Imperial Capital, was an elite soldier of the empire's Death Squad, along with his friend Leviathan. However, no longer tolerating the crimes committed against humanity, Bahamut defected and joined the nearly-defeated Resistance. He was first looked upon with distrust and contempt by his new comrades due to his previous allegiance, but Bahamut soon gained their approval and gave them hope with his super-human skills in guerrilla warfare, which helped the Resistance secure victory in several battles. Soon afterward, Bahamut assembled a four-man assault team consisting of himself and three other individuals with super-human abilities: Krystal, Harley and Sayuri. Together, they infiltrated the Commonwealth and caused devastating losses to the Empire from the inside, allowing the Resistance to move in and attack the Capital. Along the way, Bahamut rescued Dr. Geo Mandrake, who at the time was a researcher forced to work inside the Capital laboratory; his life was in danger when the Empire found out he was leaking valuable information to Bahamut.

During his missions, Bahamut and his new comrades would clash against Leviathan on several occasions, the latter who wanted to kill his former friend for his betrayal. Eventually, Bahamut reached his target, the Emperor Tiberius, and killed him in an extensive battle. This turned the tide of the war in the Resistance's favor, allowing them to vanquish the Commonwealth. Bahamut seemingly went into hiding following the end of the conflict.

These events would expand Bahamut's history as a war hero prior to the Alien Wars, and two decades before Bill Rizer and Lance Bean would gain their legendary hero status. In fact, his superior combat abilities and expert use over weaponry, his battles against the Empire's numerous soldiers, militarized machines and bio-weapons parallel Bill and Lance's future accomplishments; this effectively makes Bahamut the first "Contra" soldier in history, despite that term not being used to describe such super soldiers until twenty years later. His close teammates, Krystal, Harley and Sayuri, along with his former friend Leviathan, also possess the skills befitting of "Contra" soldiers.

He appears as the main antagonist in Contra: Hard Corps. He is a boss the player can fight in a variety of ways depending on the choices they made in the game. He also appears in several cutscenes.

He appears in various boss battle encounters depending on which path is taken. In most of them he winds up dead. 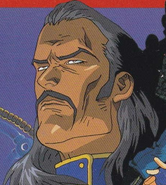 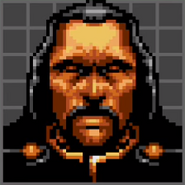 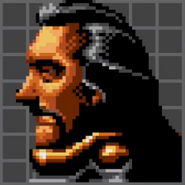 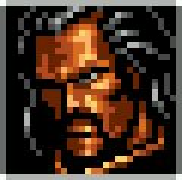 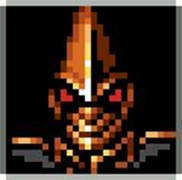 His alien redesign in the European version.

Offering the hero to join him.

Ending where he survives.

Bahamut Overdrive's first form after fusing with the alien cell.