Black Viper (ブラックバイパー, Burakku Baipā?) is one of the main antagonists in the Contra series. She is Emperor Demon Gava's sister, and in two occasions she attempted to take over planet Earth on her own.

Black Viper is an unstable biomass, thus she can mutate repeatedly, making her more dangerous in the process.

She has three known forms. Her first form is fought at the end of Operation C. The mechanical boss guarding her must be defeated prior to confronting her as the final boss, a mere alien cell contained within a glass tube.

Two other forms of Black Viper appear in Contra 4: The first, as a praying mantis-like monster. Once defeated, the creature plunges into a pile of rotting corpses in the background and immediately reemerges as a gargantuan monster. The hero then proceeds to blow an opening with their weapon on the rear end of her abdomen and the stage then continues by traveling along her insides until they reach her brain. Inside her head –and with Earth seen from space as backdrop seen through her jaws– the player must take out her eyes and fight her final form, which actually resembles Emperor Demon Gava, her brother.

Black Viper initially comes to Earth and takes over an unnamed nation. She brainwashes its military forces as her first step to take over the world. The Government sends not only Mad Dog and Scorpion, but also Bill and Lance to fight them. The Contras infiltrate the nation, fight through their defenses and defeat Hayanos 614, a powerful cyborg who was in charge of protecting her.

They discover that Black Viper was nothing more than a large alien cell contained inside a liquid vial and proceed to destroy it, putting an end to her plans for the time being. It seems likely that the unnamed nation was secretly planning to use DNA samples from this form to create artificial bioweapons, probably the ones seen in Area 4 and 5.

Two years after the Alien Wars, Black Viper returns, now evolved as a mantis-like monster. She takes control over the remaining forces of Red Falcon as well as her own forces and starts a new campaign to take over the Earth. The Government picks up a signal from the Galuga Archipelago and send Contras Bill Rizer and Lance Bean to assist Mad Dog and Scorpion. All four men head toward the island to annihilate Black Viper.

Black Viper is found at a harvest yard under the city. After an initial confrontation, she buries herself into a pile of corpses and reemerges as a colossal alien. The Contras manage to blow up the alien's abdomen and climb through inside her infested hive-like body, heading toward the skull, where her Gava-like form resides. They successfully manage to destroy her brain, thus leading to not only her death but also putting a halt to her invasion.

After being defeated in its First form, Black Viper absorbs the nearby human bodies and begins its transformation. 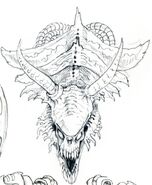