PFC Bill Rizer (ビル・ライザー, Biru Raizā?), code name: Mad Dog, is one of the two main protagonists of the Contra series, along with fellow commando and brother-in-arms, Lance Bean. He was one of the most renowned members of the "Contra" task force, an elite group of soldiers specializing in guerrilla warfare, and one of the greatest soldiers that ever lived.

Both combatants alone were able to repel numerous invasion attempts on Earth by extraterrestrial forces –mainly carried on by the evil Red Falcon army– and were known as heroes worldwide after successfully defeating them completely during the Alien Wars.

A series of events eventually made them go their separate ways and at one point even put them fighting against each other.

As part of a well-planned conspiracy, he was framed by the Government's people in power and considered a war criminal. He was sentenced to serve time in cryostasis, although he was called upon to fight once again on a couple of conflicts that arose during that time.

Unbeknownst to him, clones of him were produced, most likely while he was serving time in cryogenic prison.

In 2633 A.D., Bill was sent alongside fellow combatant Lance Bean to the Galuga Archipelago with orders to thwart a series of hostile activities that had risen on the island. Fighting together and without any offensive external support, the two soldiers alone discovered that the Galugan army had actually been infected by unknown beings that came from outer space, branding themselves as the "Red Falcon Army". The conflict for all matter gave the impression of being the first step of a worldwide invasion plan. Both men were able to break through all their lines of defense, little by little gaining terrain and fighting them inside their own nest located at the top of the island's mountains, where they came face to face with their leader Emperor Demon Dragon God Java, and overthrew both him and his army. This was only a temporary victory, though, and definitely not the last they were going to see of Red Falcon.

One year later, in 2634 A.D., a conatus of what appeared to be yet another alien invasion attempt was identified in an undisclosed country and Bill and Lance were once again sent to investigate. Once there, they could confirm the same modus operandi they witnessed a year before: the Red Falcon once again taking over the country's military forces –known as the "GX Army"– as a supposed first step to take over the world. This time the conflict was at a much larger scale, with the alien forces deploying some of their stronger units shortly after the first encounters. Bill and Lance emerged victorious once again and destroyed the main leader of Red Falcon, Emperor Demon Gava.

Another year later, in 2635 A.D., Bill and Lance, now accompanied by two other "Contra" members, Mad Dog and Scorpion, were sent to an unnamed hostile nation on an isolated South Pacific island that was attempting to use an alien cell to produce military weapons of mass destruction.

At some point after the Alien Wars, in an event not fully covered in any of the games, Bill was held responsible of an incident that involved setting off a malfunctioning hyper-magnetic weapons grid during development that ended up completely devastating 80% of Earth's population, as well as for murdering his fellow brother-in-arms Lance Bean who reportedly tried to stop him. Under these charges, he was given a sentence of 10,000 years in cryostasis prison.

Bill was temporarily released five years later by orders of the Triumvirate and fought alongside Lucia in order to stop the Blood Falcon organization, led by his ex-partner Lance, who was believed to have been killed by him. Lucia acted as Bill's watchdog during that time, as he was still not clear of the charges set upon him.

Not much of Rizer's activities are known during this time. It is likely he was still cryogenically frozen throughout all those years when he should have been long dead. His "consciousness" was used to create an artificial intelligence, and a clone of him (or probably an army of them) was made.

Finally, in 4444 A.D. he battled against the forces of Master Contra. During that time, Rizer operated under the alias of "Mystery G". This is how he chose to identify himself after meeting his clone and Jaguar Yagyu. He was easily able to defeat Plant Contra and was about to finish him, when he decided to test the clone and Jaguar as worthy of the title of "Contra". After fighting the pair, he deemed them better than he expected and teleported away.

Rizer's heroic actions in his past missions made him a hero throughout the ages, including lifting up the spirits of his clone, who was able to save the world.

Bill Rizer as he appears on the cover artwork for Contra. 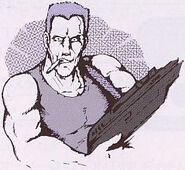 Bill in a cutscene from the Japanese version of Contra. 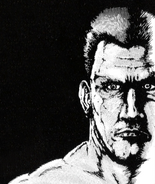 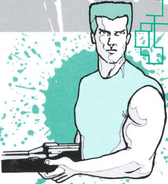 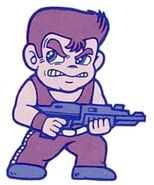 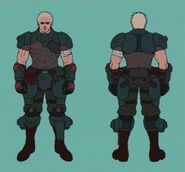 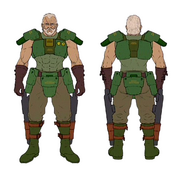 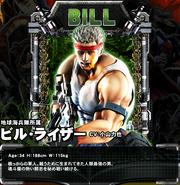 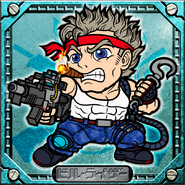 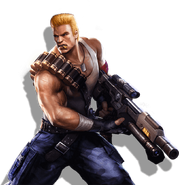 Bill in Professional Baseball Spirits A. 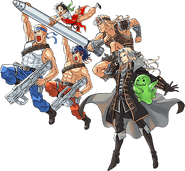 Alucard, Simon Belmont, Bill Rizer, Lance Bean and others in an artwork celebrating Konami's 50th Anniversary.
Add a photo to this gallery

Retrieved from "https://contra.fandom.com/wiki/Bill_Rizer?oldid=31238"
Community content is available under CC-BY-SA unless otherwise noted.