Big Fuzz is a gigantic, skeleton-like robot who was programmed to protect factories occupied by the alien invaders. He usually makes his entrance by forcing open a large metal door in the background and then proceeding to attack the player (these doors usually end up violently closing and beheading him at the end of the battle).

His main form of attack is to breathe a continuous stream of fire, although he can also shoot tracking laser beams from his eyes and deploy several timed bombs at once.

First appearance of Big Fuzz in the series (renamed as "Robo-Corpse" in the English instruction booklet). He is fought at the end of the Factory Zone after fighting two smaller versions of himself.

His main form of attack consists in breathing a continuous stream of fire in a clockwise motion, requiring the player to move quickly and precisely to avoid being incinerated. He can also shoot tracking laser beams from his eyes that chase the player for a few good seconds, and also deploy several timed bombs at once. If the player is on the ground by the time the bombs count to zero, they will explode and the player will lose a life. All these attacks can be combined with each other, making the fight that much more difficult.

On hard mode, all of his attacks are much more difficult to avoid:

When defeated, the sliding door in the background that Big Fuzz forced open will close on his neck, resulting on him being beheaded.

In the Game Boy port, Contra: The Alien Wars, he does not claw his way into the room; he enters it by destroying the back wall and stays there for the rest of the fight.

In Contra 4, Big Fuzz incessantly crawls through the narrow corridors of the Factory to pursue the player. He attacks by breathing a long stream of fire that has to be either jumped or crouched from, depending on the visual cues given during the battle. After taking enough damage, he chases the player and gets caught in the doors the player went through to reach it. The only way to finish him is to shoot the damaged Shouds on the sides of the door to manually close it and clip off his head.

One significant change involved in the boss fight against Big Fuzz in this game is that the player cannot cling onto the ceiling of the room where the battle takes place.

Big Fuzz still possesses time bomb deployment, but instead of releasing fire bombs which would force the player to hang onto the ceiling to avoid getting caught in the explosions, he now releases three time bombs at their current position; all the player has to do is move away from where the bombs are laid, making their pattern easier to evade.

Big Fuzz's flame breath attack also returns, but instead of breathing a stream of fire clockwise, it breathes it left and right in an attempt to sweep and burn the player.

Just like its Contra III incarnation, Big Fuzz also launches tracking projectiles (energy balls instead of laser beams this time around) at the player from his mouth, but they're shot one at a time and can be neutralized after taking multiple shots.

When defeated, in this game Big Fuzz simply breaks down and collapses.

"The giant alien robot defeated by Contra once before, its remains have been fused with parasitic fiends. It is in working condition once again. While on the outside it looks the same as ever, but internally it has an higher ratio of organic parts than mechanical." 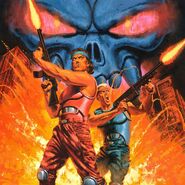 Big Fuzz in the background of the cover artwork for Contra III OST. 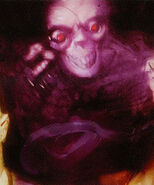 Big Fuzz from the Contra Advance: The Alien Wars EX cover artwork.
Add a photo to this gallery 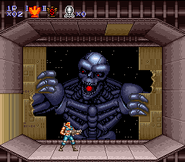 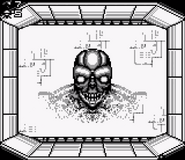 The Contra III incarnation of Big Fuzz as it appears in the second Rogue Corps motion comic.
Add a photo to this gallery

Retrieved from "https://contra.fandom.com/wiki/Big_Fuzz?oldid=29638"
Community content is available under CC-BY-SA unless otherwise noted.